It was the late 1960s. Ian was studying at Adelaide’s Roseworthy College. Seventeen-year-old Merralea lived on her parents’ property nearby and was on her way home in her Dad’s ute when it stalled. Enter 18-year-old Ian, her knight in shining armour, with a car full of trainee winemakers, including the inimitable Philip Shaw.

Scarbie assessed the situation and jumped into the car, ordering Shaw and the others to push. “He was smart enough to sit alongside me while the other guys pushed,” remembers Merralea. This decisive action impressed Merralea. The ute never recovered, but the relationship flourished – four years later they were married. The year was 1970 and the wedding took place at Roseworthy chapel.

Fresh out of Roseworthy, Scarbie headed straight to the Barossa where he worked at Saltram Winery. But it was short lived – just 12 months in fact. A casual drive through the Hunter Valley sparked a new inspiration. Scarbie vividly recalls driving up Oakey Creek Road through a procession of gum trees, rolling hills either side, believing the region had enormous potential. Ian and Merralea Scarborough arrived in the Hunter Valley with a new baby in tow (Jerome, Scarborough’s future winemaker) and big dreams to fulfill. 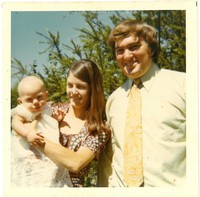 The Hunter Valley in the 1970s

Family winemaking operations such as Tyrrell’s and Tulloch had been doing their thing for years but in the 1970s, the Hunter was awash with unprecedented investment. Wineries like Hungerford Hill and Lindemans were going great guns, and new names such as Saxonvale and Rothbury were beginning to boost tourism in this burgeoning region. The vision of Scarborough Wine Co was well and truly alive, but it would be a few more years before it became a reality.

Between 1973 and 1979, Scarbie was Chief Winemaker for Tulloch and Ryecroft wineries. Living in this region provided an idyllic upbringing for Jerome and Sally, as their home was on the Tulloch winery property. By osmosis, the winemaking life began to become part of their blood.

The pursuit of building Scarborough Wine Co was put on hold in the early 1980s as Scarbie and Merralea set up a business specialising in winery equipment, a job that saw the Scarboroughs travel to California. It was these trips to the Napa that helped them understand the potential of wine tourism. This business also gave them the capital to fund their dream of setting up a family winery in the Hunter Valley. Scarborough Wine Co was soon to become a reality. Ian and Merralea purchased the Gillards Road property in the Hunter in the late 1970s.

The Beginning of Gillards Road

It was the mid-1980s. Despite being described as a time of excess and wealth, Scarborough Wine Co was a modest affair from the start. The life of a winemaker is not smooth sailing. It’s plagued with decisions, what to grow, where and when to release the first vintage.

The original vineyards at Gillards Road were planted to Cabernet and belonged to Hungerford Hill. The Cabernet was pulled out, the vineyard bulldozed and re-configured and in its place Chardonnay was planted, as well as a small amount of Pinot Noir. 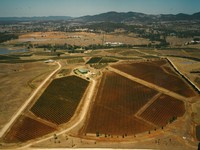 In the year leading up to the first vintage (1986), when the vines were not quite berry-fit, the first Chardonnay grapes clung uncertainly to the vines in tiny clusters. Merralea painstakingly drove round the vineyard in a Volvo with a trailer full of milk crates. She picked the entire block and Scarbie sympathetically crushed it. But no wine was made.

A year later, in 1987, the first vintage of Scarborough Pinot Noir and Chardonnay was made in the garage at the back of what is now the cellar door at Gillards Road.

Slowly, the yields grew and although in the first year only 250 dozen was produced, the yield grew incrementally every successive year. From the very first vintage, a decision about wine style was made. Yellow Label Chardonnay would only be released after three years in bottle. So when the Gillards Road Cellar Door opened in 1990, the first vintage was ready to be sold, and at that time, wine production was closer to 500 dozen. This three-year ageing practice has been an integral part of the Yellow Label’s enduring cult success, sealing Scarborough’s reputation as a premium Chardonnay producer in the Hunter Valley region. 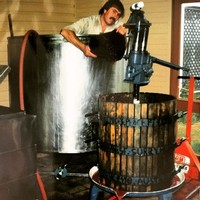 Scarborough’s early years saw Ian and Merralea travel between the US and Australia. Ian was fuelling the engine room of the Scarborough winery business as well as working as a consultant for local Hunter wineries; Merralea was deeply entrenched in the US running the mobile filtration business for half the year. Oh, and there was the business of raising two children to boot. “The family was the only staff – the kids helped us do the labelling, it was hard work but a lot of fun!” says Merralea.

It was a busy time, to say the least, but a period that both Ian and Merralea look back on fondly. Those early days of Scarborough planted the seed of a NSW business that now employs the equivalent of 20 full-time people, welcomes approx 30,000 visitors a year to its two cellar doors and sells 25,000 cases of wine annually.