Mobile Filtration Q & A with Ian and Merralea Scarborough

In the 1980s Ian and Merralea set up a business specialising in mobile filtration equipment, which took them to California and wine regions all over the country. These trips to the Napa helped Ian and Merralea understand the potential of wine tourism. This business also gave them the capital to fund their dream of establishing a family winery in the Hunter Valley. Let’s find out more about how this business gave life to Ian and Merralea’s Scarborough Wine Co.

Q How did the business begin?

A We bought the Techno-Quip Filtration business in the early 1980s. Originally we ran it exclusively in Australia but it could only be used in the first half of the year. So in order to utilise the equipment all year round, we took it to the US for the off-season.

Q How does the Rotary Drum Vacuum Filter (RDV) work?

Q How innovative was the technology at the time?

A It was very good sanitary equipment but it was old technology adapted for the wine industry. The innovation was the way in which we developed it to be a mobile service that travelled the world.

Q Why didn’t they have this technology in the US?

A There was an anti-RDV movement as they had been used in the Central Valley (bulk wine area) and so the filters were seen as a weapon to deal with bulk wine rather than something to help and even enhance and retrieve unused wine product.

Q How did you change that perception?

A When we began in 1988, we had no real commitment from the wineries but we felt that we had to back ourselves and give it a go. We went to these wineries and did the work for a very affordable price. Through word of mouth and also tenacity, the mindset regarding the machines changed and most wineries were happy to give it a go.

Q Did you go to the US prior to sending over the RDVs?

A We went over 12 months prior to do research and took part in the very salubrious (by Australian standards) industry conferences – we met industry folk, got our name out there and that helped to build connections prior to going to the US.

Q When you were developing Techno-Quip, had Scarborough Wine Co. started producing wine?

A Scarborough Wine Co. was still being developed. The vines were only a few years old, we’d just finished building the homestead in 1985 and we had a definite view as to where we wanted to the business to go, but with our first wine not being produced for another two years and released for another 5 years, we had time to consider how we wanted to launch our brand.

We were adventurous at that point of our lives (both kids were away at boarding school). Being in the US gave us a chance to go to Europe and explore the wines and wine regions over there.

Q How did being in the US influence the evolution of Scarborough Wine Co.?

A (Merralea) It helped me understand how important the visual aspects of a business are to establishing a brand. At that time, that level of wine tourism [in the US] didn’t exist in Australia. So those trips helped us develop the idea of delivering more than what people expect of a winery experience.

(Ian) In the US we were working with premium vineyards – we took the opportunity to capitalise on what we saw and streamline it to work for us in Australia. Silver Oak stands out – it sells ultra premium product. For new releases, there was a line-up of cars along the Napa highway to pick up a two-bottle allocation – we’d never seen anything like this in Australia. It made us realise how important it is to focus on the customer from day one.

Q What were you doing over this time for work other than running the business?

A (Ian) I was working as a consultant winemaker for various wine companies in the Hunter Valley, as well as running the filtration business within Australia.

(Merralea) I was mostly focused on the daily running of the filtration business in Australia and spent a large proportion of my time in the US. 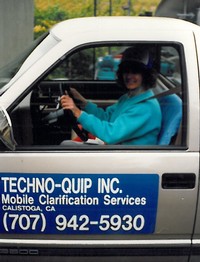 Q What were the biggest influences from the US on you and the business?

A (Merralea) Initially cash flow was the biggest influence, but having the exposure influenced how we approached the market. We created points of difference so people would visit us – no other winery was doing the tasting like us – with the winemaker and director of the business there on a daily basis.

Also, in the US in the 80s, it didn’t matter that I was a female or the wife of a winemaker. I was treated as an equal – it was refreshing as opposed to my experience in the Australian wine industry. It provided us with the drive to keep going. It reminded us that we can build a business if we have the back-bone to do it.

Q Where in Australia did you travel with the business?

A (Ian) NSW, Victoria, South Australia, Tasmania and Western Australia. Taking the business around Australia helped me build contacts. There weren’t too many people in the Australian wine industry that I didn’t know on a personal basis – it was good for mateship but also helpful for growing the Scarborough Wine Co. name.

Q Do you still have any of the original filtering machines that you took to the US?

A The smallest of the machines is in our winery – it would be 50 years of age, but the technology has not been superseded so modern machines are still using the same technology.

Q How many times would you use the RDV in a vintage?

A We run it 15 out of 30 days of picking and processing for 12-hour shifts. We use it less than we used to – we have better presses that create fewer solids and we have adopted different techniques. But we still see a place for the RDV.

Q Do wineries still use RDVs?

A It’s still the best way to reclaim juice lees or wine lees – it’s now a part of a regular winery set up. It was very expensive equipment back in the day, so the mobile nature of the business made it a success.

Q Did it influence the Scarborough style of Chardonnay?

A We had already made our minds up as the style was dictated by the character of the Chardonnay from the Gillards vineyard, but we saw some interesting techniques in California. What was more influential was what was happening in Europe.

Assignment Clock
@ 07/09/2017 at 9:30 PM
http://www.assignmentclock.com/
I have one as well, same age, and there are a few neighborhood folks here who work in mobiles. On the off chance that you can discover one of those, he will likewise have contacts for folks who do particular work like pipes, so you won't need to make sense of who's great. Falling flat that, I would search for a general contractual worker or an extremely experienced woodworker who can go about as temporary worker for you.

Simpson
@ 17/09/2017 at 4:42 AM
http://https://www.assignmenthelpsquad.co.uk/assignment-writing-service/
The lady who is expert in multiple professions best chief, expert door manager and much more. I read the full story about the Scarborough business and I know much she sacrificed and worked hard to make her business next to the level and she belongs to the Australia overall the story is really inspiring women who worked and achieve her dreams using experience and these question answers show her ability and talent.

Jackson
@ 08/09/2020 at 9:08 PM
http://www.fortworthclearinternet.com/top-10-antivirus-security-software.html
I have one as well, same age, and there are a few neighborhood folks here who work in mobiles. The lady who is expert in multiple professions best chief, expert door manager and much more. Such a great post.

Martha Clark
@ 02/01/2021 at 9:06 PM
http://https://www.webtechcoupons.com/best-vpn-service-providers/
The content you have shared with us about Mobile Filtration Q & A with Ian and Merralea Scarborough is really informatiove.

Martha Clark
@ 02/01/2021 at 9:10 PM
http://www.webtechcoupons.com/best-vpn-service-providers/
The content you have shared with us about Mobile Filtration Q & A with Ian and Merralea Scarborough is really informatiove.