Was it always about Chardonnay for Scarborough Wine Co.?

There was never any doubt that Chardonnay was going to be the variety on which we hung our reputation – it’s a grape that Scarbie has always been obsessed with. Why? His fascination is due to the fact that it’s possible to make so many styles from one variety.

It all started with our Yellow Label, a winner from the start. We made the decision right from the first vintage in 1987 to age every bottle of Yellow Label for three years before release. It’s a wine with lots of obvious, big flavours, launched when oaky chardonnays were all the rage.

The most compelling part of marketing this wine was the success of the distinctive Yellow capsule at the top of the bottle. At the time, when we dined in Sydney restaurants that poured our wine, we could easily see which diners were buying Yellow Label.

Strangely enough, it was during the mid-90s, when big, oaky styles were out of vogue, that we found demand for the wine increased. Since then, we’ve never seen a decrease and it’s become even more popular ever since.

Ask any of us what is it that makes the Yellow Label so special and it’s simple – it’s full flavoured and easy to drink. But the best sentiment comes from Scarbie himself: It’s aged and ready to drink, it has flavour, and it’s a wine for drinking not getting all cerebral about.”

While the Yellow Label garnered a cult following, demand for other styles of chardonnay increased, so as the years progressed, we saw the opportunity to craft another style that could potentially be sold as an export label.

This is how the Blue Label was born. This wine was a deliberate point of difference to the Yellow Label and was a more delicate style that was all about the fruit flavour rather than the oak treatment. This wine catered well for the on-premise market at restaurants and allowed us to build our reputation beyond the Yellow Label Chardonnay fans.

Finally, with the arrival of the White Label, our Chardonnay trio was complete. This wine was created to typify the soil DNA of Gillards Road. We wanted to make a wine in the Burgundian tradition that also paid respect to Hunter terroir, especially our Gillards Road vineyard with its limestone-derived red soils that are free-draining and fertile. This was a wine Scarbie really wanted to make. In fact, the entire Scarborough family has a natural affinity with the grape and wanted to see this project realised, as it uses some of the best fruit in the vineyard and some of the most expensive oak in the winery. 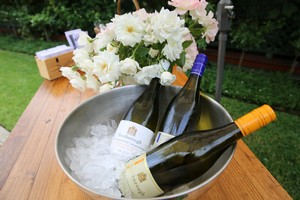 In 2016, the White Label evolved into 'The Obsessive' with the release of the 2013 vintage. It’s the same White Label wine with an even fiercer focus on crafting a wine that honours the Gillards Road vineyard and Ian Scarborough’s obsessive approach to winemaking. Quietly spoken, hardworking and dedicated, Ian is a member of the old Hunter guard. In the region, Ian is known as ‘Scarbie’, but at the winery, he’s acknowledged as ‘obsessive’. Obsessive about his vineyard; obsessive about his wine. A Shiraz and Semillon will be released as complementary wines in 'The Obsessive' range but only when the seasonal conditions are perfect and the parcels of fruit are ideal.

It’s apt that our top-tier Chardonnay is labelled with the term ‘obsessive’, given the nature of our enduring relationship with this beguiling grape variety. Long may it reign in our Hunter land, and long may it be enjoyed by ardent Chardonnay lovers all over the world.

Robert Griffith
@ 12/09/2017 at 2:18 AM
http://www.writingjunction.com/research-papers/
Personally I don’t recommend to use wine in the party this website is all about wines but some of the posts were really interesting and this is one of them so I decided to comment here and shared my opinion because these posts are not just about the wine promotion it’s also share some useful information which can help us while researching this topic in fact I was also researching on this topic and I got a lot of help from here so I am glad to find your website.